HAPPY FATHER’S DAY TO ALL YOU GREAT FATHERS AND FATHER FIGURES! WE LOVE AND APPRECIATE YOU DEARLY. 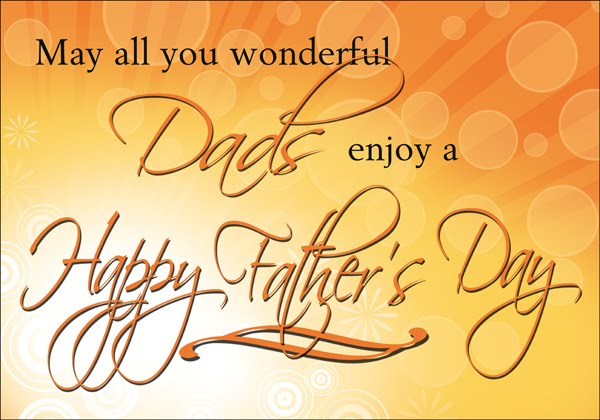 In honor of this wonderful occasion I decided to do something different. I asked a dear friend of mine to write this blog entry. I know you will love it just like I did. Please welcome Ms. Keitaya Lockett!

A week prior to Mother’s Day, my father and I were briefly discussing our family’s plans for the holiday.

My mother, who is a diabetic and showing early signs of dementia due to two strokes, never forgets Mother’s Day and was excited about the dinner reservations that I had yet to make.

After a huge sigh, my father reluctantly asked me where we were going for dinner. He hates the crowds, noise and the long waits.

He would much prefer to throw a few steaks on the grill and spend Sunday afternoon washing his car, manicuring his lawn and relaxing on the front porch, admiring the fruits of his labor.

Regardless of his preferences, I babbled on about how I’ve called a dozen high-end restaurants, who were offering astounding buffet brunches with outstanding prices to match, $50 per adult.

I also reminded him that his two beautiful granddaughters, ages 12 and 14 no longer count as “children” in the eyes of the restaurateur and would also be obligated to pay the full price.

I think I said too much. He began to ramble on about how Mother’s Day is one of the busiest days for restaurants and how he’s tired of the hoopla. “You can get into any restaurant on Father’s Day with no problem.”
That resonated with me long after we hung up. Why is it that children race home from school, eager to present their homemade cards and potted plants for mom and empty-handed in the middle of June for dad?

There are many schools in the Metro Detroit area that dismiss for the summer right before Father’s Day or are still in session after Father’s Day.Why can’t dad get any love on his special day? Well, there are two main reasons:

Father’s don’t make a big deal out of their holiday like mother’s do. A pat on the back is appreciated but not necessary.A good father is secure with his position, capability and responsibility. Point. Blank. Period.
ONE BAD APPLE SPOILED THE BUNCH!

The baby daddy phrase is so common now that I’m unsure if it’s still used as negative connotation or just for lack of better terms, like father.

Unfortunately, there are mothers and fathers alike who don’t appreciate the gift of parenthood and choose not to be a part of their children’s lives.

However, fathers are singled out more than absentee mothers. Instead of father’s day being recognized for its true intent, to acknowledge and appreciate the paternal parent, it has regrettably turned into a day to demean absentee fathers and put mothers on a pedestal who believe that they are doing a superior job of being both mother and father.

It is not uncommon nowadays for single mother’s to receive “happy father’s day” text messages and phone calls from their peers, in an attempt to magnify the fact that their child’s father isn’t present or isn’t living up to their standards of good parenting.

Instead of focusing so much on fathers being truant, we should honor the fathers, uncles, grandfathers and brothers who joyfully take an active role in a child’s life, whether it’s their child or someone else’s.

My biological father was a wonderful parent, even though he and my mother separated when I was four years old. He passed away in 2006 but I value all the efforts that he made from hundreds of miles away to show me the same love that he would have shown me if he were still in the household.

My step-father, whom I do call by name but recognize as my father, to adequately supply all the respect that he deserves, equally stepped up to the plate and assisted my mother in rearing me: educationally, financially and spiritually.

So thanks Mike, and thank you to all the fathers who don’t get recognize on Father’s Day or any other day.

Your efforts of love and commitment to your sons and daughters don’t go unnoticed. I

f you choose to dress to nines and be escorted out for an over-priced dinner or kick back with some lemonade at a classic car show, let’s do it.

It’s your day and we will never take it away from you again.